Premise: This is Us, and This is Us Outside by Kuzhali Manickavel Reviewed by Farah Ahamed

This is Us, and This is Us Outside by Kuzhali Manickavel

How to leave the reader disorientated and thinking ‘We are all responsible,’ Time and Point of View in Khuzali Manickavel’s 'This is Us, and This is Us Outside'.

The first time I read Kuzhali Manickavel’s stories I was left completely disorientated. I thought it must have been because I missed something, so I went back and reread them. But even the second and third time my head was still whirling. I felt on the one hand connected to the emotional centre of the story, but at the same time distinctly unmoored. The stories have a light, almost playful tone, but this is only an artful and skilful ploy to beguile us from the deeper issues at stake for the author.

Take for instance her very short story, ‘This is Us, and This is Us Outside’, where none of the characters have real names. We are introduced to The Pepsi Girl (later nicknamed Capacity), The Girl with Razor Blades, The Gay Man and The Paracetamol Girl. The choice not to give proper names is curious; it suggests the characters could be anyone, or no one, fictional or real and makes you wonder what Manickavel was trying to hide or show. And why those particular names? Why The Pepsi Girl – was she wearing Pepsi-t-shirt? Did she look like a girl from the Pepsi poster? Who is she really? The same applies to the other characters.

The story begins with a confirmed time frame, location and action, and is told from the first  person plural point of view and also more unusually, in the future tense.

‘The Pepsi Girl will puke all over the table in fourteen minutes. We will watch her…’

But by the time we get to the second paragraph which is dotted with, dialogue predicated with, ‘she will say,’ ‘she will not say,’ ‘she will suddenly show,’ ‘she will go,’ ‘we will never,’ the reader is already wondering what Manickavel intends to convey with this host of  somewhat reliable characters, and a somewhat, unnamed, unreliable narrator.

The third paragraph is even more disconcerting as the story shifts from the plural to the first person single point of view. It has a few lines of sparse dialogue where the narrator casually introduces and dismisses an imagined or possible, rape scene.

‘I imagine The Pepsi Girl’s unconscious body being passed around a backroom where she is gang-raped by auto drivers, sons of politicians and hotel staff. “I’m sure she’s fine,” I say to The Gay Man.’

The narrator, rather than focusing on the shocking incident, makes a sideways comment about The Gay Man being the first person she’s ever met and how she will never forget him. The effect of this is to leave the reader wondering about what’s really going on, while at the same time, recognising and sympathising with the narrator’s state of mind: how often it is that we ourselves try to hide from thinking about difficult or emotionally inconvenient by focussing on something random.

The fourth paragraph of the story employs both the first person plural and singular and even though the shift is seamless and nothing jars, still something makes us stop and reread the sentences and appreciate their syntax. The core of the dialogue is where the heart of the story lies and burns like a strong flame. We are told, ‘rape’ is an uncomfortable word, and ‘We will all feel responsible.’ This is the crux of it, both for reader and characters.

The next two short paragraphs flit through the existential crisis of the characters, echoing Hamlet’s ‘to be or not to be.’ But here it is, ‘to die or not to die.’

Both are written in the first person plural and give personal details about The Pepsi Girl, making her almost real and relatable to. But before we can get too close to the burden of dealing with the reality of rape and the inconvenience of it, the narrator quickly shifts our focus to thinking about The Pepsi Girl’s parents and how ‘We will be glad they are not our parents.’

The second last paragraph starts in the first person plural, but the second line shifts to the singular and concentrates on the narrator’s observations and thoughts about the ordinary. But then, unexpectedly, the paragraph closes with a casual racist statement from The Girl with Razor Blades, ‘And white women are such fucking whores,’ she says, to deliberately provoke the white woman at the next table who turns to look at them. The effect of this is to unsettle the reader, forcing us too, to take a closer look at the characters.

The story closes with a final paragraph of only one startling line, told in the first person plural, in the future tense. ‘We will only notice The Pepsi Girl fourteen minutes later, when she pukes all over the table.’ After a whirlwind, starting with ‘The Pepsi Girl,’ a girl without a proper name, and ending with ‘the table,’ a proper noun, we are left wondering what exactly happened to them and to us.

The story is about the emotions of transitory relationships, and confusing, seemingly impersonal, yet lasting encounters which are so prevalent today. It explores how one relates to strangers and friends, individuals and families, and how thoughts arise naturally from observations and casual conversations to help us avoid thinking about what hurts the most. Manickavel’s short story is about the imagined rape and alcohol poisoning of a stranger. Or is it?

The story will take you fourteen minutes or less to read. It will leave you reeling. And later you will decide, ‘We are all responsible.’ 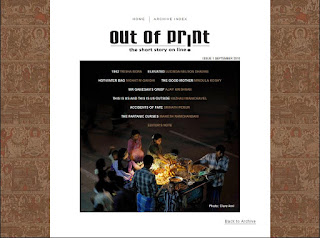 Read Kuzhali Manickavel's 'This Is Us and This Is Us Outside' in the first release of Out of Print, Out of Print 1, September 2010.

Posted by Indira Chandrasekhar at 11:52 PM 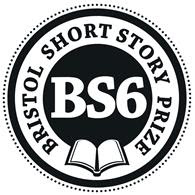 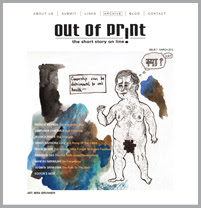